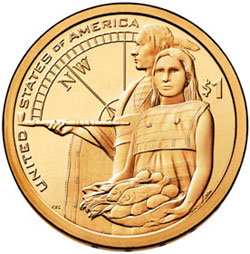 The mintage levels for the Native American Dollars have been at both extremes during the course of the series. After initial production at high levels, the most recent issues have seen production at extremely low levels.

The production levels for circulation strike versions of the series have in large part been driven by the production of Presidential Dollars due to a provision within Public Law 110-82. The law required that the number of coins minted and issued with the Native American Dollar design shall not be less than 20% of the total number of $1 coins minted and issued for the year.